You are here: Home / Sports / Lackey does it with his arm and his bat to help the Cardinals take three out of four from the Cubs 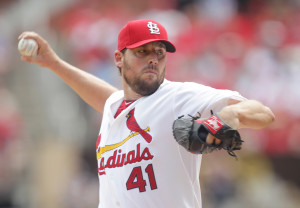 St. Louis Cardinals starting pitcher John Lackey delivers a pitch to the Chicago Cubs in the second inning at Busch Stadium in St. Louis on May 7, 2015. Photo by Bill Greenblatt/UPI

With Matt Carpenter and Matt Holliday getting the day off, the Cardinals got plenty of offense and plenty of pitching from John Lackey in their 5-1 win over the Cubs.

Lackey struck out 10 in 7.1 innings and allowed just the one run on five hits. Lackey helped himself at the plate. With a 2-0 lead in the fourth, Lackey doubled in two runs scoring Jason Heyward and Peter Bourjas who picked up RBIs in the second. Heyward went 3 for 4.

The Cardinals now hit the road to Pittsburgh then onto Cleveland next week.