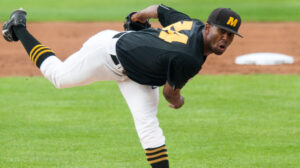 No. 21 Mizzou baseball (27-19, 13-9) used nine hits and four unanswered runs to defeat the Ole Miss Rebels (24-23, 10-12), 4-2 on Friday night (May 1). Breckin Williams (Oronogo, Mo.) moved into sole possession of second place in the Mizzou baseball history books with his 11th save of the season.
Junior Reggie McClain (Duluth, Ga.) was perfect through the first four innings of the contest, striking out four Rebel batters in that span. In fact, all four hits and his only walk came in the two-run fifth inning as he was perfect in the other six innings that he threw, earning his sixth win of the season.
The Tigers remained hitless until a two-out Ryan Howard (St. Charles, Mo.) single in the bottom of the inning, but was unable to come around and score. Ole Miss broke the game open in the fifth inning with three consecutive hits by Colby Bortles, Sikes Orvis and a RBI single by Errol Robinson to put the Rebels ahead, 1-0. An RBI groundout by Austin Knight scored Orvis to stretch the Ole Miss lead to 2-0. Josh Lester (Columbus, Ga.) and Brett Peel each gunned down a Rebel runner at the plate in the frame to keep the deficit manageable.
The Tigers responded in the bottom half of the fifth inning with two runs of their own off of RBI doubles from Zach Lavy (Auxvasse, Mo.) and Brett Bond (St. Louis, Mo.). Jake Ring (Ingleside, Ill.) continued the doubles streak to begin the sixth inning. A sacrifice bunt by Howard and an RBI single by Lester scored Ring from third to put the Tigers on top, 3-2.
McClain worked a 1-2-3 seventh inning adding another strikeout to his six for the night. Bond ripped another double down the left field line to start the bottom of the seventh inning. Shane Benes (St. Louis, Mo.) then singled through the left side, and Ring was able to tally his 24th RBI of the season on a single through the right side for another insurance run for Mizzou, 4-2.
McClain was lifted in the eighth inning for Andrew Schwaab (St. Charles, Mo.) McClain surrendered four hits in the game, all of them coming in the two-run fifth inning. Schwaab worked efficiently through the eighth inning, fanning three of the four Rebels he faced.
Williams came in for Schwaab in the top of the ninth. After two Ole Miss hits to begin the ninth putting runners on the corners with no outs. But the junior got a strikeout, groundout and got a huge strikeout to seal the deal and the win.