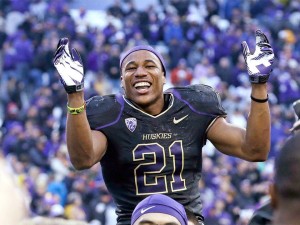 The Kansas City Chiefs have selected cornerback Marcus Peters out of Washington with the 18th overall pick in the 2015 NFL Draft.

Though being dismissed from Washington brought up some substantial concerns about Peters’ ability to transition to the NFL, his on-field talent warrants his selection at this spot.

Impressive in nearly every aspect of the defensive game, he could have true shutdown potential in the NFL if he can avoid the kind of issues that brought an early end to his college career.

Peters should immediately compete for a starting cornerback spot opposite Sean Smith, potentially helping give the Chiefs an improved defensive backfield to pair with one of the NFL’s most dominant pass rushes.