You are here: Home / Sports / Broncos move up to select Missouri’s Shane Ray with 23rd pick 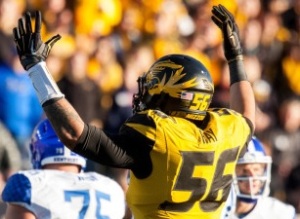 The Denver Broncos swapped first-round picks with the Detroit Lions on Thursday, moving up from No. 28 to 23 overall to select Missouri linebacker Shane Ray.

Ray, who was cited for marijuana possession recently, was named the SEC Defensive Player of the Year as a junior last season after totaling 14 1/2 sacks, 22 1/2 tackles for loss and 65 total tackles for the Tigers.