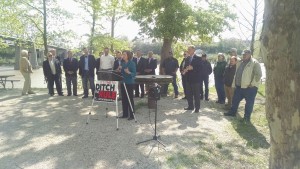 Hartzler agrees the nation’s water supply must be kept safe, but says, “We need to make sure that we do it in a way that works with states and local governments to ensure this happens and isn’t a federal land grab,” said Hartzler. “This is certainly very, very concerning. This violates the balance of power that has been working for years between federal jurisdiction, state and local jurisdiction to ensure that Americans have a clean water supply.”

Luetkemeyer believes that the rule was implemented illegally. “This was something they bureaucratically just did as a fiat rather than as a worked on rule that allowed everyone to have some input and everyone could live or work with,” said Luetkemeyer.

According to the EPA’s website, input from the agriculture community shaped the proposal.

Harry Thompson with the Missouri Farm Bureau says the rule also effects the nation’s food supply and where children play, among other things.

“Unless you live in a concrete jungle and don’t have any concern about where your food comes from, this is an issue that should concern everyone,” said Thompson.

The legislation would also require the EPA go back to the drawing board with local and state officials to develop a new rule.