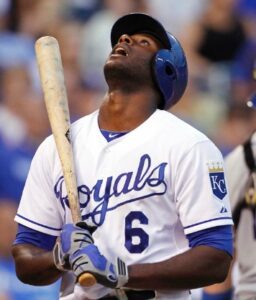 Kendrys Morales hit a tiebreaking two- run double in the bottom of the eighth inning to lift the Kansas City Royals to a 4-2 win over the Oakland Athletics in the rubber match of a heated three- game series.

The animosity between the teams stemmed from Oakland’s Brett Lawrie sliding hard into Alcides Escobar at second base in Friday’s opener, which left Escobar with a knee injury.

It appeared the score was settled when Royals hurler Yordano Ventura plunked Lawrie on Saturday.

However, tempers flared again Sunday, with hard-throwing Kelvin Herrera whizzing a 100-mph pitch behind Lawrie in the top of the eighth. Herrera was immediately ejected by home plate umpire Greg Gibson.

Royals manager Ned Yost came out to argue and was banished by Gibson, along with pitching coach Dave Eiland.

Cain got his revenge in the eighth by tying the game at 2-2 with an RBI double.

Kazmir walked Paulo Orlando to begin the eighth and was relieved by Eric O’Flaherty (0-1) after Mike Moustakas grounded out. Cain greeted O’Flaherty with a double to the gap in left-center field. After Cain stole third base and Eric Hosmer drew a walk, Morales drove an O’Flaherty pitch high off the center-field wall.

Wade Davis tossed a 1-2-3 ninth to earn his second save.

“I’m very proud of the way they rallied,” said Yost. “There was a lot of stuff that happened today.”

Franklin Morales (1-0) got the win after retiring Lawrie on a popup to end the top of the eighth.

Zobrist exited the game in the bottom of the fifth after Christian Colon beat out an infield single. Royals second baseman Omar Infante left the game right before Zobrist did with a strained left groin. Infante led off with a double and was injured retreating to second base on Colon’s hit.

Orlando Calixte made his major league debut running for Infante and advanced to third base on a Kazmir wild pitch before scoring on a Jarrod Dyson groundout.

Previous Post: « Mizzou finshes off spring football practice with Black and Gold game
Next Post: Wainwright shows why he’s the ace as Cardinals finish off sweep of Reds »