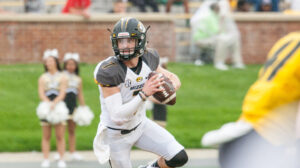 The starting units for the Mizzou Football team (Mizzou1) scored 10 consecutive points right before halftime, but the reserves (Tigers2) locked down defensively to earn a 17-10 victory in the Black and Gold scrimmage Saturday at Faurot Field.

Tigers2, made up of reserves, began the game with a 14-0 lead and the ball. The starters picked up a big sack from defensive lineman Marcus Loud that forced the reserves into a three-and-out. Tigers2 quarterback Eddie Printz was on point from the pocket, completing 5-of-6 passes for 23 yards.

Andrew Baggett put the first points on the board for Mizzou1 with 4:14 to go in the half, nailing a 31-yard field goal. After the starters forced a turnover-on-downs later in the quarter, Maty Mauk started to get in a groove.

The redshirt junior sprinted up the field for 12 yards with just under a minute to go in the half. After a 14-yard throw to Wesley Leftwich, he connected with Russell Hansbrough in the middle of the field for 12 more yards. Mauk would finish off the drive with another 12-yard rush and a three-yard touchdown pass to redshirt sophomore J’Mon Moore to make it 14-10 at the half. With the starters being pulled from the game at halftime, Mauk would finish the day 9-of-15 for 68 yards and a touchdown.
At halftime the annual most improved player awards (as voted on by Tiger coaches) were handed out, with the winners including:
• DeSean Blair (Wide Receiver)
• Nate Crawford (Offensive Lineman)
• Rickey Hatley (Defensive Lineman)
• Donavin Newsom (Linebacker)
• Aarion Penton (Cornerback)
• Eddie Printz (Quarterback)
• Jason Reese (Tight End)
• Anthony Sherrils (Safety)
• Ish Witter (Tailback)
The defense picked up in the second half despite Redshirt freshman QB Marvin Zanders showing off his strong arm. Late in the third quarter, Tigers2 – now made up of the 3rd- and 4th-stringers in the second half- saw their new quarterback sling a 25-yard throw followed by a 23-yard completion both to Raymond Wingo.
Mizzou1 – comprised of the No. 2 unit with the starters done for the day – held the reserves to a field goal after the reserves drove all the way down to the red zone. Tigers2 kicker Nick Coffman would tack on three more points with a 25-yard field goal to make the final score 17-10.
With the conclusion of the Black and Gold Game, Mizzou football is officially done with the spring season. The Tigers will begin their 2015 season at home against Southeast Missouri State on Sept. 5.

Previous Post: « Sporting Kansas City drops first match in over a month to Los Angeles
Next Post: Royals survive five different ejections to come from behind and defeat Oakland »