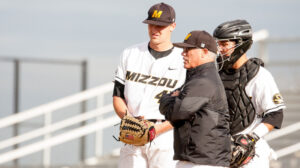 The Trojans jumped ahead in the contest in the first inning after Ryan Scott reached base on a one-out error and then scored on a single to the right side by Kyle Kirk. The game remained quiet until the top of the third when Josh Lester (Columbus, Ga.) had a web gem on a tough ground ball in the hole to throw out Tanner Rockwell.
The Tigers’ first hit came on a double ripped down the line by Lester in the bottom of the fourth inning, and he advanced to third on an error by the right fielder. Trey Harris (Powder Springs, Ga.) came up next to hit a sacrifice fly to left field, scoring Lester from third to tie the game.

Brett Peel (St. Charles, Mo.) led off the bottom half of the sixth inning with an infield single and later scored on the single to right field from Jake Ring (Ingleside, Ill.). Ring came around to score on an errant throw on a pickoff attempt by the catcher as the Tigers took the 3-1 lead. UALR scored a run in the seventh after Michael Schueler singled and Ryan Scott brought him around to score on an RBI double to left field.
Two singles in the top of the eighth and an RBI single by Scheuler tied the contest, 3-3. The Trojans again strung together a pair of hits and pushed another run across the board on Kirk’s second hit and second RBI of the game.