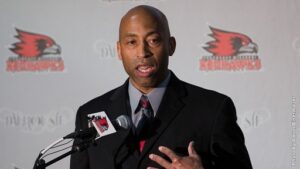 Ray spent the last three seasons as head coach at Mississippi State. In his three-year tenure at MSU, Ray compiled an overall record of 37-60. He led the Bulldogs to a 2-2 mark in the SEC Tournament, including an upset win against Vanderbilt in 2013-14. Ray helped the development of two All-SEC Freshmen in Craig Sword and Gavin Ware, as his recruiting classes received national attention.

“The thing that really impressed me outside of talking to Rick on the phone and he being a Kansas City guy is just hearing how interested he was to come here to Southeast Missouri State University and how interested that he was to be able to make this place a winner,” said Alnutt. “I’m so excited to introduce Rick Ray as our next head coach here at Southeast.”

Ray, the 20th head coach in Southeast men’s basketball history, agreed to a four-year contract which will run through 2019. He will earn a base salary of $175,000 plus a $20,000 annuity. Additional incentives and contract details are being finalized. Ray is the first African-American head coach in the 108-year history of the program.

Certainly no stranger to NCAA postseason play, Ray has been an assistant at three different institutions that enjoyed success at the highest level.

Prior to his arrival in Starkville, Miss., he spent two seasons at Clemson, where he was associate head coach to Brad Brownell. Ray also spent four successful years on the staff of Matt Painter at Purdue. He began his Division I coaching career at Indiana State, serving seven seasons.

All three programs participated in the NCAA Tournament.

While at Clemson coaching in the highly-competitive Atlantic Coast Conference, the Tigers won 38 games during Ray’s two-year stint as associate head coach. In 2010-11, the Tigers finished the year with a 22-12 overall record and 9-7 mark in the ACC en route to making the NCAA Tournament for the fourth-straight season. Clemson advanced to the second round of the tournament that year.

Ray was an assistant coach from 2006-10 under Painter at Purdue, where the Boilermakers won 103 games during his first four years on staff, including 15 victories over Top 25 competition. During his tenure, Purdue advanced to the NCAA Tournament each season and made the Sweet 16 his last two years there.

Ray was part of the 2006-07 Purdue staff that signed arguably the top class in school history, a group that was rated No. 5 nationally by Scout.com and No. 6 by Rivals.com. That class included All-American Robbie Hummel and current NBA players JaJuan Johnson and E’Twaun Moore.

While at Purdue, Ray was on Painter’s staff that also included former Tennessee head coach Cuonzo Martin, who recently completed his first season at Cal.

Ray coached at Missouri Valley Conference member Indiana State for a period of seven years (1997-2004), helping ISU to consecutive 20-win seasons and NCAA Tournament appearances in 1999-2000 and 2000-01. In 1999-2000, the Sycamores compiled a 14-4 record in the MVC and won the regular season title. ISU then won the MVC Tournament the following season. The Sycamores later upset No. 4 seed Oklahoma in the first round of the 2001 NCAA Tournament. In addition, Ray was part of the ISU staff that defeated perennial power Indiana in back-to-back seasons.

Following his time at ISU, Ray spent two seasons (2004-06) as an assistant coach and recruiting coordinator at Northern Illinois. In 2005-06, the Huskies were regular season Western Division champions in the Mid-American Conference for the first time in school history with a 17-11 overall record and 12-6 ledger in the MAC.

Ray began his coaching career as a graduate assistant at the University of Nebraska-Omaha, a Division II program. He helped orchestrate a seven-win turnaround during his second season in 1996-97.

A standout player for Grand View College (Iowa), Ray was an All-American Scholar-Athlete and honorable mention all-conference performer in 1993. He earned his undergraduate degree in applied mathematics and secondary education from Grand View in 1994. Ray received his master’s degree in athletic administration from Nebraska-Omaha in 1997.

In 2013, he was the recipient of Grand View’s Distinguished Alumni Award.

Ray and his wife, Breyana, have two sons, Deacon and Mason, and a daughter, Katriece.

Playing Experience
Spent first two years of college basketball at Labette Community College in Parsons, Kan., before concluding his career at Grand View College in Des Moines, Iowa, where he was an honorable mention all-conference standout.