You are here: Home / Sports / I was at the Blues’ division clinching win last night and a big thumbs up to the staff at Scottrade Center (VIDEO) 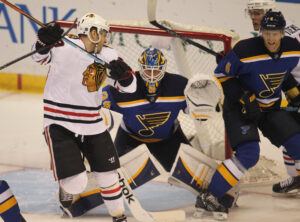 Chicago Blackhawks Kris Versteeg tries to block the view of St. Louis Blues goaltender Jake Allen in the first period at the Scottrade Center in St. Louis on April 9, 2015. Photo by Bill Greenblatt/UPI

For those of you who follow my videos or have heard my interviews with our radio affiliates, I make no secret that I was born and raised in Chicago and hey I’m a sports fan as well as being someone who covers sports for a living…so I cheer for Chicago teams.  However, it doesn’t impair my ability to report on what I see.

Last night, I took my daughter to her first hockey game last night as the Blues clinched the Central Division with a 2-1 win over Chicago.  We wore our Chief Blackhawk jerseys with pride, but I’m here this morning to give some love to the staff who worked the game last night.  For the woman who handed us our rally towels, who joked we’d need those to wipe our tears after the Hawks lost, to the usher who said that if anyone bothered us, “let me know and I’ll take care of you”…you all made our visit to enemy territory enjoyable.

To the St. Louis Blues fans themselves…you were awesome.  There was no taunting, no bad mouthing us, just good old fashioned loud “LET’S GO BLUES!” I already knew this from my past experiences at Blues-Blackhawks games, 99.9% of the fans are good sports.  Especially to the gentleman in section 308 that I congratulated and high-fived!

Watch my video as I share my stories, and also breakdown the game and the Blues playoff chances.  Yes, even though as a fan I was pulling against them last night, I appreciate good hockey and right now the Blues are playing some of the best in the NHL at the right time.  Jake Allen and David Backes have a lot to do with that.