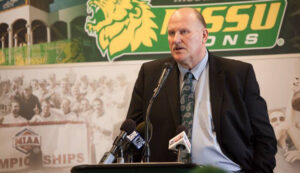 Missouri Southern Director of Athletics Jared Bruggeman has announced that Denver Johnson will be the 13th head football coach in MSSU history. Bruggeman made the announcement at a press conference in the George A. Spiva Library on Wednesday.

“The applicant pool for this position was extremely qualified,” Bruggeman said. “We had over 110 applicants with a variety of coaching expertise, from coordinators to long tenured Head Coaches at all levels, including the NFL. We, as a group, identified particular attributes that we wanted in our new head coach.

“Coach (Denver) Johnson, contains all of these qualities and quickly rose to the top of our competitive applicant pool. It became rather clear during his on-campus visit that he will be the leader that we need to direct our football community as we continue to grow and strive to be a top tier program in Division II.”

Johnson comes to Southern after serving four seasons at the University of Tulsa as the Assistant Head Coach and Offensive Coordinator.

He has spent a total of 30 years coaching college football. In the summer of 2012, Johnson was awarded the Merv Johnson Integrity in College Coaching Award by the Jim Thorpe Association.

“I want to first and foremost thank Jared Bruggeman and everyone on the search committee for the chance to lead this program,” Johnson said. “I was at a point in my career where I wanted to get back into a head coaching spot and Missouri Southern is a great opportunity for myself and my family. I’m just an hour and a half from my hometown and I can’t think of a better place to continue my career.

“I spoke with members of the community when I came to visit the campus and the overwhelming feeling toward the University is that MSSU is in a good place with President (Alan) Marble at the helm. I am extremely happy to be here.”

In his four seasons at Tulsa, four of his offensive linemen earned first-team all-league accolades, including Stetson Burnett (2013), Brian DeShane and Jared Grigg (2012) and Clint Anderson (2011). Tyler Holmes was an honorable mention performer in 2011 and spent the 2012 season with the Minnesota Vikings.

Johnson coached an offensive line that helped pave the way for a 1,000-yard rusher in two of his final three seasons at Tulsa. In 2012, Tulsa’s offense ranked fourth nationally for fewest sacks allowed, ninth for rushing offense, 21st for fewest tackles for lost yardage allowed and 28th for total offense.

Before joining the Tulsa staff, Johnson spent two seasons as the offensive line coach at the University of Colorado (2009-10). The Buffs’ offensive unit jumped 66 spots in NCAA stats for fewest sacks allowed in 2010, while coaching offensive lineman Nate Solder, who was the New England Patriots’ first round draft choice in 2011.

Prior to Colorado, Johnson spent a total of 12 years as a head coach at two Football Championship Subdivision (FCS) schools, including nine years at Illinois State (2000-08) and the three seasons before that at Murray State (1997-99). He compiled an overall 69-66 career head coaching mark. Johnson recorded a 21-12 record at Murray State and won 48 games at Illinois State. His 2006 ISU team registered a 9-4 mark, the second most wins in school history, advanced to the FCS quarterfinals and finished the season with a No. 8 national ranking.

At Illinois State, his teams produced some of the most prolific offensive campaigns in school history by establishing 28 offensive records, including most points and the most rushing, passing and total yards in a single season.

Before his first head coaching stop, Johnson spent 11 years as an assistant coach, beginning his coaching career as a graduate assistant in 1985 at Oklahoma State. He coached three years at Tennessee-Martin (1986-88), four years at Oklahoma State (1989-92), three seasons at Mississippi State (1993-95) and one year at Oklahoma (1996), coaching the offensive line at all four schools.

An All-Missouri Valley Conference offensive lineman as a senior for Tulsa, Johnson was an eighth round draft choice by the Tampa Bay Buccaneers in 1981. He spent two years (1981-82) with the Bucs and three seasons in the USFL, playing two years (1983-84) with the Los Angeles Express and the 1985 season with the Houston Gamblers. Johnson’s USFL tenure included playing stints with NFL Hall of Fame quarterbacks Jim Kelly and Steve Young.

Johnson earned his bachelor’s degree in business management from Tulsa in 1981. He and his wife, Danita Kay, have two daughters: Taylor and Kelsey.