You are here: Home / Sports / Steen’s tough play along the boards creates a scoring opportunity and win for the Blues in overtime (VIDEO) 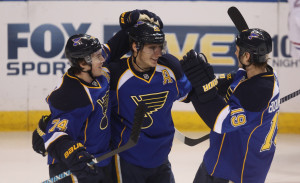 Two days ago Alex Steen scored the Blues only goal, his 400th career point, as St. Louis lost to Detroit just 24 seconds into overtime.  On Tuesday night in Pittsburgh, Steen scored his 24th of the year and it came just 35 second into overtime as the Blues were on the winning end of an OT game, in a 3-2 final over the Penguins.

Steen not only netted the game winner on a deflected shot from the point, but he did the dirty work along the boards to come away with the puck and feed it over to Zbynek Michalek, whose slap shot was redirected by Steen past Pittsburgh goalie Marc Andre-Fluery.

Through 74 games played, the Blues maintain a one-point lead over Nashville in the Central Division standings.