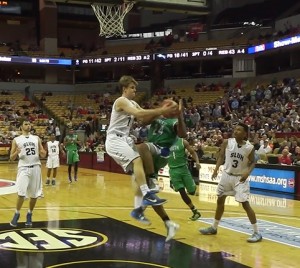 Blue Springs South advances to Saturday’s championship game after beating St. Louis University High 61-52 in the first semifinal of the day on Friday afternoon at Mizzou Arena.  Kevin Puryear led the Jaguars with 25 points and 13 rebounds.

Puryear had to manage minor foul trouble in the first half, yet managed to score 13 points, but the Junior Bills hung around keeping it a four point game at 29-25 at the break.

The Jaguars used their size on defense to push the lead to nine after three quarters, holding SLUH to just eight points.  The Junior Bills shot just 28%  in the 2nd half, including 1 of 8 from three point range.

Missourinet one on one with Kevin Puryear