You are here: Home / Sports / Only three Tiger wrestlers are in the hunt for national titles, as Mizzou has some work ahead of them to keep their championship hopes alive (AUDIO) 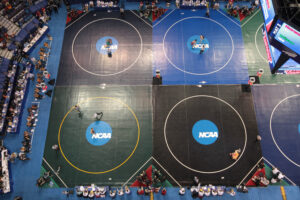 Matches have begun on Day 1 of the NCAA Division 1 Wrestling Championships at the Scottrade Center in St. Louis on March 19, 2015. Photo by Bill Greenblatt/UPI

Nine Mizzou wrestlers are still alive after the first day of NCAA nationals at Scottrade Center in St. Louis.  However, only the three number one seeds have a chance for individual national titles.  Overall, the Tigers are in a tie for 5th place with 18 points.  Friday’s wrestlebacks will be the key for Mizzou’s national title hopes as head coach Brian Smith wants to see those six wrestlers build on the Tigers’ overall score.