You are here: Home / Crime / Courts / Attorneys, family, argue whether killer of Barry County deputy should be executed by Missouri tonight

It’s been more than 18 years since Cecil Clayton fatally shot Barry County Sheriff’s Deputy Christopher Lee Castetter. His attorneys argue that a brain injury he suffered 43 years ago means he shouldn’t be executed for that crime, as is scheduled to happen today.

In the 1972 accident a piece of lumber shot through the skull of Clayton, now 74, and doctors removed part of his frontal lobe. His attorneys say he was a changed man after that. They say he went from a happily married, religious man who had quit drinking, preached and sang gospel music, to a man who suffered from anxiety, loss of memory and focus, impulsive behavior, and hallucinations.

His attorneys don’t deny that Clayton fatally shot Castetter in November, 1996, when the deputy responded to a call from Clayton’s girlfriend’s sister, who was concerned about Clayton sitting in the driveway in front of her home following an argument with his girlfriend.

Attorney Cynthia Short maintains that examinations by multiple doctors in the past decade show him to be incompetent to be executed under the U.S. Constitution and Missouri law. 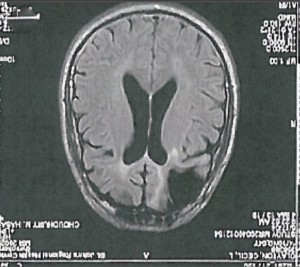 A brain scan provided by one of Clayton’s attorneys illustrates the portion of his frontal lobe that was removed after the 1972 accident at a sawmill.

“If a person is unable to understand what his punishment is, or that he has been punished, or believes that the punishment is the product of a conspiracy that has been brought forth against him based on his delusional thinking,” Short told Missourinet, “then it is not in society’s interest and certainly not in the interest of the impaired person to punish them in a way they do not understand.”

Short said Clayton’s IQ has also diminished over the years to 71, and argues that to execute him would violate laws against executing the intellectually disabled.

The state Supreme Court has rejected one of Clayton’s attorneys’ attempts to halt his execution, finding that he is competent to be executed and that he remembers, “details from 1996 quite clearly and is aware that both he and his counsel continue to search for arguments to preclude his execution,” as written by Judge Paul Wilson in his opinion. It also found that he does not meet the state law’s threshold for an intellectual disability.

“I think it’s B.S.,” James Castetter, Christopher Castetter’s brother, said of the claim that Clayton is incompetent. Castetter told Missourinet he believes Clayton knew what he was doing the night he killed his brother.

“He knew he was wrong because he went to Cole’s house to get him, let him know what he did, [to say] ‘You’re my alibi,'” said Castetter, referring to Clayton’s friend at the time of the murder, Martin Cole. “If he would have stayed there, asked ‘What did I do?’ Said, ‘Hey Cole, I did this. I can’t believe I did this,’ that might be one thing,” said Castetter. “He knew what he was talking about, so that’s a competent person.”

James Castetter, who is an emergency medical technician in Florida, is in Missouri today to witness Clayton’s execution.

“I think it’s going to put closure,” said Castetter. “Knowing that the evil that killed my brother is no longer walking this earth … and remembering my brother the way he used to be.” Castetter has named his daughter after his brother, and plans to bring her to Missouri some other time to see the section of highway in southwest Missouri that is named for him.

Castetter hasn’t told his daughter why he’s in Missouri this week. “That’s one thing I don’t want her to know, at least now.” 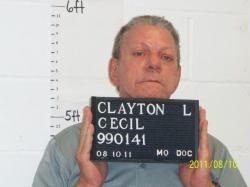 Clayton’s attorneys have asked the U.S. Supreme Court and the Eighth Circuit federal court to halt his execution and additional actions are pending in a U.S. Western District and U.S. Eastern District court. Governor Jay Nixon (D) has also been asked to commute his sentence to life in prison without parole. Nixon was Missouri’s attorney general when earlier challenges to Clayton’s death sentence were rejected, including when a federal appeals court upheld that sentence in 2008.

“Deputy Castetter was protecting the law-abiding citizens of Barry County when he was shot and killed without warning by Cecil Clayton,” Nixon said in a statement at the time. “The jury appropriately determined Clayton should face the ultimate punishment.”

Clayton’s execution is set to happen between 6 p.m. tonight and 5:59 Wednesday. If it hasn’t happened by the latter time, the execution warrant from the state Supreme Court will expire and the court would have to set a new date. His is the first execution since the 1930s that Missouri has scheduled for a time other than 12:01 in the morning.