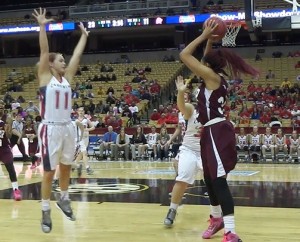 Central Park Hills forwards of sisters Sydney and Megan Skaggs and Olivia Casey combined for 42 of the Rebels 55 points, leading the school to their first ever basketball championship with a 55-19 win over Cardinal Ritter.  The Rebels finish the season 31-1, capping it off with a 28 game win streak.

Central held Ritter to 14.6% shooting for the entire game, including just 1 of 16 in the second half. The Rebels took over in the second half adding to their 14-point halftime lead outscoring the Lions 16-4.  Central scored 32 points in the paint and limited Ritter by forcing 12 turnovers and outrebounding the Lions 47-25.

Casey led the Rebels with 16 points, including 3 of 5 from three-point range.  Megan Skaggs had 15 and her senior sister Sydney finished with 11.

After the game, I had the opportunity to meet with the Skaggs sisters. The younger Megan was emotional after the game, knowing this was her final time playing with her sister Sydney, who is a senior.  The love these two share for each other is amazing.

Cardinal Ritter finishes the season 24-6.  They were led by Andranae Wash and Romekia Wallace who each had seven points.