You are here: Home / Sports / High School Sports / Advance starts fast, keeps up the pressure for a third place finish in the Class 1 boys showdown with Leeton 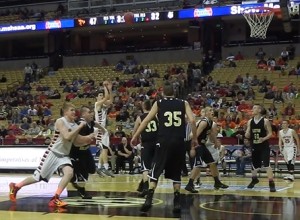 Advance attempts a shot in the second half.

The Advance Hornets got off to a fast start and then used defense to turn in some easy transition baskets to defeat Leeton, 69-53 in the Class 1 boys third place game.

A fast start for Advance, much like they did against undefeated Meadville, jumping out to a 22-13 lead after the first quarter.  The Hornets shot 68% in the first quarter as Leeton struggled after matching buckets early.

The Bulldogs started the first two minutes of the second quarter with a 7-2 run to cut the lead to 24-20 for Advance, but the Hornets kept rolling and finished the half on a 13-9 answer to go up 37-29 at the break.

Leeton struggled against the strong Advance defense, turning the ball over 12 times in the first 24 minutes of the game and the Hornets increased their lead to 20.