You are here: Home / Sports / Chiefs begin to address issues at the wide receiver position by as Jeremy Maclin plans to sign as a free agent 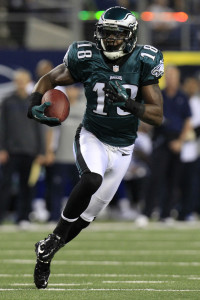 The first day of free agency in the NFL is Tuesday.  That is when it is expected that former Philadelphia Eagles and Missouri Tigers wide receiver Jeremy Maclin will sign with the Kansas City Chiefs.

Maclin will be reunited with is former coach in Philly, Andy Reid.  J-Mac also returns to his home state.

Maclin, who will turn 27 in May, had his best pro season in 2014 after missing the season before with an ACL injury.  Maclin had 85 catches for 1,318 yards and 10 touchdowns.

Dwayne Bowe will most likely be cut, shedding a projected $14 million from the team’s salary cap.  Bowe did not catch a touchdown pass last season.  In fact, no wide receiver caught a touchdown pass for the Chiefs.  Maclin’s contract will be in the range of $10 million.