U.S. Attorney General Eric Holder has reaffirmed that he plans to announce the findings of the Justice Department investigations stemming from the shooting of Michael Brown, Junior, before he leaves office. 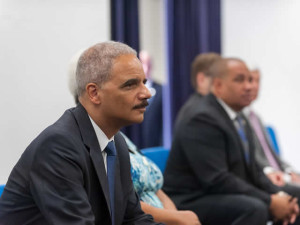 Holder told the National Press Club he is “confident” he will be the attorney general to announce those.

“My hope would be, as I said, to make these determinations before I go. The reviews are underway. I was briefed on both of them just last week. I’m satisfied with the progress that we have made and also comfortable in saying that I think I’m going to be able to make those calls before I leave office,” Holder said.

Holder gave no indication as to what those investigations have found, and was not asked about a report from the New York Times last month that cited an unnamed source saying the Department would not charge Wilson with a civil rights violation.

“The process that we have engaged in is, as I said at the time back when I went to Ferguson, independent, thorough, and based only on the facts and the law, and I’m confident that people will be satisfied with the results that we announce.”

Holder also defended a statement he made in October that a “wholesale change” is needed in the Ferguson Police Department.

“I don’t think that that response was inappropriate,” said Holder. “Nothing I say in response to a reporter is going to have an impact on the career people who are looking at what action we ought to take, if any, with regard to the Ferguson Police Department.”

Some elected officials including Mayor Knowles have said it is important for those findings to be released in order for Ferguson and the surrounding communities to proceed with healing, and because some feel there is the possibility of additional unrest when those investigations’ results are released.