You are here: Home / Sports / Alden ready to pass to baton to a new leader. Coaches react to the news of Alden’s departure from the Athletic Department (VIDEO) 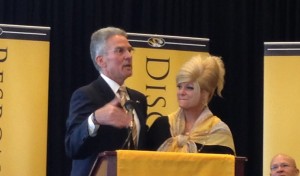 Mike Alden and his wife Rockie at his press conference on Friday, January 30, 2015

Citing a speech Dr. Martin Luther King gave over 50 years called “Drum Major Instinct,” outgoing Missouri Director of Athletics Mike Alden, spoke about how all of us wanting to be the one who runs the parade.

“You’ve got to humble yourself to make sure that you’re allowing other people to lead,” said Alden at the Reynolds Alumni Center on the Missouri campus.

Alden said now is the perfect time for him to step aside.  He, along with his wife Rockie and son Jake, have discussed Alden taking his career in a different direction for a couple of years.  Just recently he strongly felt the time was now.  Alden leaves the Missouri athletic program in great shape as he moves forward in September as an instructor where he will participate in the Positive Coaching Program and higher education leadership courses.

I had the opportunity to hear from head football coach Gary Pinkel and I talked one-on-one with both basketball coaches, Kim Anderson and Robin Pingeton, about how they will handle the transition to a new A.D.

Alden said this wasn’t a matter of health, family or financial woes.  He was tearful when he remembered many of his friends and colleagues and talked about his hero growing up…his older brother John.