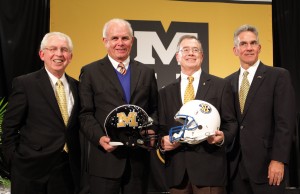 “Mike has been a transformative leader for Missouri Athletics since 1998 and he has commanded national respect across the college athletics landscape for his service on numerous NCAA committees.  Mike played a critical role in the transition of Missouri into the Southeastern Conference and I will always remember his calm demeanor, his authoritative presence and his infectious enthusiasm as he introduced the Mizzou tradition to the SEC.”