You are here: Home / Sports / Pinkel on Alden’s announcement: “It’s tough to see him leave.” Credits A.D. with reason he took the Mizzou football job 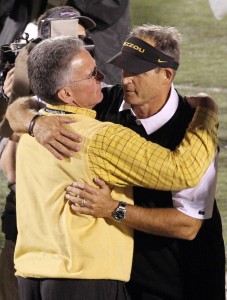 Reaction from not only outside the Mizzou athletic department, but inside continue to roll in on Thursday night, hours after Mike Alden announced he was stepping down as Director of Athletics, effective August 31.  Gary Pinkel, on his own website, released a statement, expressing gratitude and admiration.

“It’s hard for me to overstate how grateful I am for Mike Alden, and for all that he has done for me professionally and personally,” said Mizzou Football Head CoachGary Pinkel. “I’ve said it before that Mike Alden is the reason I came to Mizzou. His leadership and support for our program and for this Athletic Department has been transformational.  I think back to when we brought our program here, it’s really amazing to see how much better things are across the board.  It’s tough to see him leave, but I’m very happy for Mike and Rockie for being able to take this next step in their lives.”