You are here: Home / Sports / Martin Brodeur to retire after winning three games since joining the Blues. Will now join the club’s front office 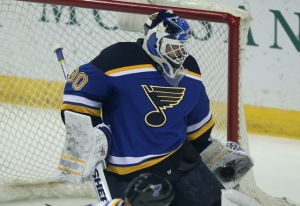 St. Louis Blues goaltender Martin Brodeur makes a glove save against the Colorado Avalanche in the first period at the Scottrade Center in St. Louis on December 29, 2014. UPI/Bill Greenblatt

Goaltender Martin Brodeur will retire with 691 wins and 125 shutouts, which are most in NHL history.  The Blues will hold a press conference at Scottrade Center on Thursday at 10:30 a.m. CT with Brodeur, to announce that the 42-year old will take a job in the Blues’ front office.

Brodeur signed a one-year contract with the Blues on Dec. 2 after a knee injury to starting goalie Brian Elliott.  Brodeur was 3-3-0 with a 2.87 GAA and .899 save percentage with the Blues.

Brodeur’s final shutout came Dec. 29 for the Blues in a 3-0 victory against the Colorado Avalanche, coached by Patrick Roy, whose wins record Brodeur broke.