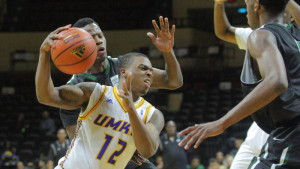 The UMKC men’s basketball squad came up big on Thursday night in the second half, turning a 12-point deficit with 5:32 to play into a 66-63 victory over CSU Bakersfield at Municipal Auditorium, making it back-to-back wins at home. UMKC freshman Collin Jennings blocked a three-point attempt in the corner with one second remaining to seal it.

The 12-point comeback was the biggest of the season in a win for the ‘Roos, who also came from 11 back last Saturday in the win against Chicago State.

“We really showed some toughness tonight,” Head Coach Kareem Richardson said. “Even though we didn’t shoot well from the line, we played very good on the defensive end down the stretch. We also took care of the basketball in the second half with only one turnover.”

The first half started slow offensively for both squads, as expected, with two of the top defensive teams in the league facing off. The Roadrunners (5-14, 1-3 WAC) pulled out of an early stalemate to take a 16-9 lead, but 11:27 had already run off the clock. UMKC (7-13, 2-1 WAC) could only muster 11 points through the first 15 minutes of the period, but they woke up down the stretch.

The ‘Roos scored scored 15 points in the final 4:42, and closed the half on a 13-7 run to close within six at the half at 32-26. Three-pointers by Frank Williams, Noah Knight and Jennings helped the offensive spark.

UMKC shot 50 percent in the half compared to CSUB’s 42 percent, but the two teams combined for 19 turnovers, keeping either from getting into a groove. The ‘Runners used a 17-8 advantage on the glass as well, including a 7-1 edge in offensive rebounds. The result was a 9-2 scoring margin in second-chance points.

The second stanza was a different story for the ‘Roos though. They turned it over only once, and held the ‘Runners to only four offensive boards and three second-chance points. The ‘Roos also played more aggressive on offense, getting to the line 28 times in the period, while getting the ‘Runners in foul trouble.

UMKC kept the margin within striking distance for much of the half, as CSUB would get its lead to 12 on two different occasions, but each time the ‘Roos answered. The final run by Bakersfield started with 7:25 on the clock, pushing a seven-point lead to 12 with 5:32 to play. The ‘Roos rallied for a 14-1 run, holding the ‘Runners without a field goal until only 1:00 remained.

During that rally, UMKC forced three turnovers, and got CSUB leading scorer Aly Ahmed to foul out of the game. Offensively, Knight hit a huge three in the corner off an assist from Martez Harrison with 2:09 left to give the ‘Roos their first lead since 4-2. The ‘Roos hit three of their next four free throws to make it 62-58 with 1:29 to play. Knight came up big again with two made free throws after along Bakersfield jumper to push it back to four.

The biggest shot for the ‘Runners came on the next possession to get it back to one as Dashawn Richmond hit a guarded three with 44 seconds left. Harrison then got fouled with 26 seconds left, and he hit both to get it back to three. After a stop on defense, UMKC had a chance to ice it with nine seconds left, but missed both free throws, giving Bakersfield a chance to force overtime with a three, but Jennings came away with the block to seal the comeback.

UMKC was led by Harrison with 17 points, while Knight tallied 10. CSUB had a 37-24 advantage on the glass, but UMKC forced the guests into 18 turnovers.

The ‘Roos will look to make it three in a row on Saturday when league-leading Seattle comes to town for a 6:05 p.m. tipoff from Municipal Auditorium. It is Retro ‘Roo Night, with UMKC wearing retro style uniforms and basketball alumni being welcomed back.

Previous Post: « Chiefs game in London Nov. 1st will kickoff at 8:30am local time
Next Post: Man escapes after being kidnapped and driven across Missouri »