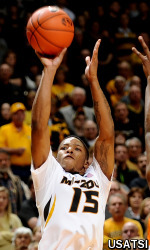 Jalen Jones and Danuel House both scored 16 points as the Texas A&M Aggies captured a 62-50 win over the Missouri Tigers in an SEC battle at Reed Arena.

Jones, who shot 5-of-10 from the floor, added a team-best nine rebounds for the Aggies (12-5, 3-2 SEC) as they extended their win streak to three in a row. Alex Caruso pitched in with 11 points for the hosts as well.

The Tigers (7-11, 1-4) were paced by Wes Clark who tallied a game-high 18 points, hitting 4-of-6 shots behind the 3-point line, adding six assists and five steals for a squad that has dropped four straight decisions.

Missouri opened the meeting on a 7-2 run and shot an impressive 52.2 percent from the floor in the first half, converting 5-of-8 beyond the arc on the way to a 31-24 edge at the break. Texas A&M managed to knock down just one-third of its 24 field goal attempts through the first 20 minutes of action.

In the second half the roles reversed as the Aggies hit on 52.2 percent and the visitors a total of only eight field goals. The Tigers failed to make it to the free-throw line after intermission and were outscored at the stripe, 9-0, en route to the double-digit setback.