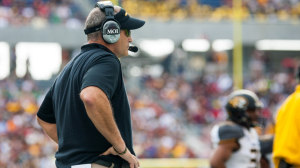 Pitts, who played in 40 games as a Tiger for Pinkel from 2001-04, comes on board after a stellar high school coaching career at Helias Catholic High School in his hometown of Jefferson City, Mo. Pitts has been head coach at Helias for the past four seasons, and compiled a 40-15 record while winning district championships each year and finishing as Missouri Class 4 state runner up in two of those years (2012 and 2013). Prior to that, Pitts was an assistant coach on the Helias staff for six seasons (2005-10).

“We’re excited to have Phil join our coaching staff,” said Pinkel. “Here’s a guy who came through our program during our building phase, and he demonstrated great leadership in some difficult times, and clearly had a passion for the game of football. He’s done great things at a first-class program like Helias, and we are looking forward to Phil adding his skills to our team,” Pinkel said.

“My time at Helias has truly been amazing and the people I have met, coached, and worked with will forever have a special place in my heart,” said Pitts. “Coaching college football has always been a dream of mine and I am so excited to join Coach Pinkel and his staff at Missouri. Mizzou has always been home to me and I couldn’t be happier to be a Tiger. I have the utmost respect for the entire program and I can’t wait to get started!” he said.

As a defensive analyst for the Tigers, Pitts will focus on assisting new defensive coordinator Barry Odom with a day-to-day evaluation of the Tiger defense, which includes self-scouting, as well as various other duties related to the operation of the football program.
Pitts was credited with 36 tackles from his defensive tackle position in 40 career games for Mizzou. He had an interception return for a touchdown of 49 yards in 2004 at Faurot Field against Arkansas State. He earned his degree in general studies from Mizzou in 2005 and later completed his teacher certification program from MU in 2006. Pitts and his wife, Lindsey, have two daughters, Kayla (3 years old) and Avery (1).

Previous Post: « Missouri State hangs tough for a half but Shockers prove too much for Bears
Next Post: Road woes continue as Mizzou squanders halftime, falls at Texas A&M »