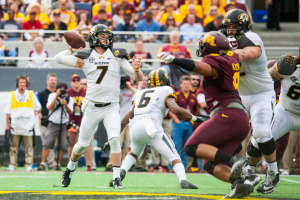 I recently did a radio interview in the Kansas City market and the host asked me what I thought of Mizzou’s chances of repeating as the SEC East champs in 2015.  I said I thought they had just as good as any team, but the one position and one potential downfall could be the depth at wide receiver.  That could cause issues for the Tigers’ chances of “three-peating” in the SEC East.

Missouri won’t bring back a lot of experience at wide receiver, which could make things even more difficult for Maty Mauk in 2015.  The Tigers weren’t very deep at the position last season and now Mizzou has to replace Bud Sasser, Jimmie Hunt and Darius White along with their 147 catches for just over 2,000 yards and 23 touchdowns.  Next season, the Tigers return just ten catches for 114 yards from the wide receiver position from players like Nate Brown, J’mon Moore and Wes Leftwich.

Building depth at that position is a major priority for Gary Pinkel.  On Sunday, he received verbal commitments from two wide receivers. Jonathan Johnson from Memphis and Justin Smith, a 6’7 receiver from Dublin, Georgia who was visiting over the weekend.   They also picked up a linebacker.  Franklin Agbasimere from Montverde (Fla.) Academy, who reportedly runs a 4.45 40-yard dash. He’s 6’2, 220 pounds.

Johnson is only 5’8 and will better served as a slot receiver.  He could see playing time as a true freshman.  He could also be considered as a return man down the road as well.  Smith finally gives the Tigers that height they missed with DGB getting kicked off the team last season and of course with the departure of Marcus Lucas and L’Damian Washington.

The Tigers now have 18 oral commitments they are waiting for.  National signing day is February 4th.