You are here: Home / Sports / Missouri State downed by Evansville on a late second shot from the MVC’s leading scorer. Bears without top scorer who was suspended 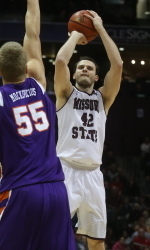 Missouri State held the Missouri Valley Conference’s top scorer to just 7 points and 2-for-12 from the field, but it was D.J. Balentine’s bank shot with 5.8 seconds remaining that was the difference as Evansville clipped the Bears, 56-54, Wednesday at JQH Arena. The Purple Aces were held to their third-lowest field-goal percentage of the season (.400).

Missouri State, which played without the services of its top scorer Marcus Marshall due to a team suspension, had four players in double figures, including 15 points, 5 rebounds and 5 assists by Dorrian Williams. Christian Kirk added 12 points, freshman Chris Kendrix contributed 10 points and 5 rebounds in his return to the starting rotation, and Tyler McCullough notched 11 points for the Bears.

MSU heads back to the road for a Sunday matchup against No. 23 Northern Iowa at 3 p.m. The game will be played before a national TV audience on ESPNU.