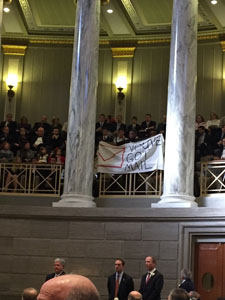 The group –strategically placed throughout the upper seats—chanted, “black lives matter, white lives matter” and “no justice, no peace.” Kinder pounded the gavel, demanding quiet, then angrily ordered police to clear the gallery.

The demonstrators, white and black, unfurled banners throughout the upper seats and spoke directly to Kinder before they were taken out.

WATCH THE VIDEO OF THE INCIDENT:

This is the latest in a series of demonstrations spurred by the police shooting death of a black teen in Ferguson, MO– and the subsequent non-prosecution of the officer. Protests have continued in that area since the incident in August and have become part of a larger movement following more recent police-involved deaths in Staten Island, NY and in Cleveland.