A state representative who changed parties in November thinks that move will give her bill to change abortion policy a better chance to pass. 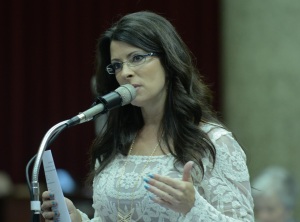 Representative Linda Black (R-Park Hills) is proposing that the Department of Health and Senior Services create a video that includes all the information that state law requires be given to a woman considering an abortion, and that a doctor show that video to a woman in addition to telling her that information and giving it to her in writing.

“This would take a picture, a document, a piece of paper, and it would turn it into more of a narrative documentary, so that mother or that person contemplating an abortion will know exactly what they are doing,” Black told Missourinet.

Black says as a former educator, she believes people learn in different ways.

Black believes she’ll be taken more seriously on the issue now that she’s a Republican.

“A lot of people in the building there at the Capitol think that a Democrat just wants to have a pro-life bill or an amendment just to show that some Democrats are pro-life, and it’s like, you get a little pat on the head and say, ‘Thank you for being pro-life but we’re not going to move your legislation forward.'”

She says the reception her proposal got when it was an amendment in the 2014 session helped convince her to change parties.

“I had talked to the Democrat leadership, had told them that I was going to be doing this, had asked for their support in the fact that it is already in statute in paper, pencil form. This is just taking it one step further,” said Black. “I thought the leadership was on board and as soon as I put this amendment on the floor … I was verbally debated by my own caucus on this last year, very actually abrasive and very hateful when it came to this issue … and I knew that right then we had a huge problem of moving forward together.”