You are here: Home / Sports / Chiefs Alex Smith out with lacerated spleen for Sunday vs San Diego 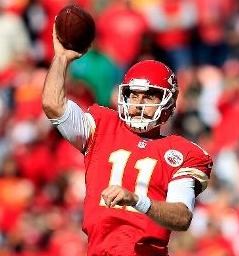 Alex Smith throws a completion against the Jets (photo/NFL)

Smith, who practiced earlier this week, suffered the injury during the third quarter of last week’s 20-12 loss to Pittsburgh after getting hit on a throw to rookie receiver Albert Wilson.

“I felt great athletically, running around, throwing,” Smith said. “Just kind of had this constant deal going on and thankfully, Doc kind of urged me to get the test.”

“Once you started hearing how serious it is, you start knowing the implications can come of this as far as not playing.” commented Smith. “That’s the last thing you want to hear.”

Chase Daniel will get the start at quarterback in a game that will have postseason implications for Kansas City.

The Chiefs need to defeat the Chargers and also need Cleveland and Jacksonville to win on the road in order to make the playoffs.