Missouri has carried out its 10th execution of the year.  The state has executed 48-year-old Paul T. Goodwin, who was sentenced to death in December 1999 for the murder of Joan Crotts, a former neighbor whom Goodwin killed with a hammer on March 1, 1998.

He received a lethal dose of pentobarbital at 1:17 in the execution chamber at the Eastern Reception, Diagnostic & Correctional Center in Bonne Terre.  His official time of death was 1:25.

Goodwin’s attorneys tried to appeal by arguing that he is mentally disabled and shouldn’t be executed.  Those efforts resulted in a delay of the execution by more than an hour, but the U.S. Supreme Court denied a stay of execution.  Governor Jay Nixon then denied an appeal for clemency for Goodwin.

Court documents say Goodwin had frequently harassed and threatened Crotts while he lived in a boarding house next to her home in St. Louis County.  Goodwin was eventually evicted from that boarding house and Crotts’ daughter, Debbie Decker, says Goodwin blamed Crotts for it.  While Goodwin was being evicted he yelled at Crotts, “I’m going to get you for this, bitch.”

Goodwin returned to the neighborhood nearly a year and a half later after being evicted.  He snuck into Crotts’ home through an unlocked back door and sat on a chair in the basement for several hours. Eventually, he confronted Crotts in the kitchen with a sledge hammer.  Goodwin pushed her into the rear bedroom and sexually assaulted Crotts.  He then seized Crotts from behind and forced her to open the door leading to the basement stairs.  He shoved her down the stairs and struck her in the back of the head several times with the hammer.

Before Goodwin left, he wrote on a scrap of paper, “you are next,” and left it on the kitchen table.  Decker believes that note was intended for her.

Crotts was still alive when Decker found her that afternoon, and was able to tell police what had happened before she died undergoing brain surgery that night.

Police traced a hearing aid they found at the crime scene to Goodwin.  Goodwin confessed to the crime.  Also his fingerprints were found at the scene and Crotts’ blood was on his clothes. 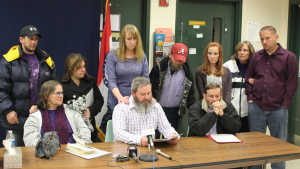 Prosecutors suggested revenge as the motive for Crotts’ death.  Goodwin’s attorneys’ used an insanity defense, but a prosecution psychiatrist said Goodwin knew what he was doing and was not mentally ill.  The Missouri Supreme Court upheld the death sentence in 2006, saying he was intelligent enough to die for his crime.

Goodwin’s sister, Mary Goodwin Mifflin, said in an affidavit as part of a clemency petition to Governor Nixon that her brother is so mentally disabled that he doesn’t realize what is happening to him.  The affidavit says she called him in prison and he complained about not getting ice cream in his commissary order.  She tried to talk to him about his clemency efforts, but his attention drifted to a television show.

“It is just too much for him to comprehend,” Mifflin wrote.