You are here: Home / Sports / Martin Brodeur makes 32 saves in his home debut for the Blues. Grabs his 690th career win as St. Louis tops Florida 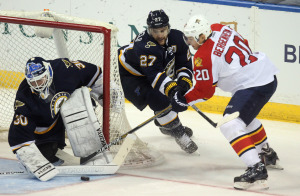 New St. Louis Blues goaltender Martin Brodeur gets his stick down to stop a shot by Florida Panthers Sean Bergenheim in the first period at the Scottrade Center in St. Louis on December 8, 2014. UPI/Bill Greenblatt

42 year old Martin Brodeur made his home debut for the St. Louis Blues and made 32 saves, including 17 in the second period, to lead his new team to a 4-2 win over the Florida Panthers.

What a night it was for Brodeur, who picked up career win 690.  Fans were chanting “Marty, Marty, Marty,” and the club paid tribute to Brodeur with a welcome to St. Louis video before the game.

“I didn’t know what to expect coming in,” said Brodeur. “It’s all about winning. When you win, I think the fans are able to be a little more cheerful. They acknowledged before the game with a little video, and I didn’t expect that. A lot of good things. I’m really happy to be here.”

Chris Porter’s first goal of the year was a redirection from Barret Jackman shot from the blue line with 1:54 left for the winning goal. Paul Stastnyscored into an empty net with 31.3 seconds remaining.  Maxim Lapierre and Ian Cole scored for the Blues, who jumped over the Chicago Blackhawks into first place in the Central Division.