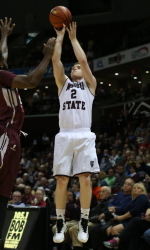 Ruder finished 7-for-10 from beyond the arc and made 8 of 11 shots overall to pace the win. Marcus Marshall added 18 points – 6 in the final minute – to help the Bears’ cause, while fellow guard Dorrian Williams contributed 10 points, a career-high 9 rebounds and 5 assists.

Mareik Isom led three Trojans in double figures in the scoring column with 14 points, while James White added 13, and Ben Dillard contributed 11. UALR (4-2) led by 11 early in the second half before going nearly six minutes without a field goal late in the game.

Missouri State went into the half trailing by five, but immediately trimmed its deficit to 32-30 on the first play of the second half when Camyn Boone scored a traditional 3-point play just 12 seconds into the final period.

But Steve Shields’ Trojans responded with a vengeance, reeling off 9 unanswered points to take a 41-30 lead less than 90 seconds later.

Ruder ended the Missouri State dry spell with his third trey of the game with just under 18 minutes remaining, and then got the deficit to 47-43 at the 14:39 mark with his fifth.

With 8:28 to go, Gus Leeper scored on a short jumper for UALR to push the visitors ahead 60-52, but that’s when Missouri State mounted its rally. The Bears put together four consecutive defensive stops and then sparked a 15-1 run over the next six-plus minutes to pull ahead 67-61. The stretch was highlighted by Ruder’s final long ball of the night with 5 minutes to go, and a Chris Kendrix trey as the shot clock expired at the 3:09 mark. After Boone was flagrantly fouled and made a pair of free throws, MSU kept possession up by six and just 2:12 remaining.

UALR chipped away and got back within four points on two occasions, but Missouri State had an answer each time. Marshall responded on the first run with a floater in the lane with just under a minute to go, and then after a Ruder steal with 7 seconds left, Marshall was fouled and made both free throws with 6.9 ticks showing.

The Trojans fired home a desperation 3-pointer by Isom with 1.3 seconds to go to make it a 71-68 game, but Marshall was wrapped up and fouled before the buzzer after which he converted his final two charity shots of the night to give MSU a five-point win.

Missouri State had just 10 turnovers on the night, posted 22 points in the paint and logged 15 assists.

In the first half, the Bears stormed out to a seven-point lead 11 minutes into the game on a Marshall layup to cap a seven-point half for the MVC’s top scorer. But UALR answered with a 7-0 run to tie the game at 22 on back-to-back 3-pointers by Reid.

Ruder responded by giving the lead back to the home club on consecutive possessions, first with a 12-footer, and then a clutch trey from the corner at the 5:35 mark that put MSU ahead 27-24.

But the rest of the half belonged to the Trojans who closed out the opening period on an 8-0 run to take a 32-27 lead into the break. UALR, which started just 3-of-11 from the field, finished the half 10-for-25 and a 19-14 rebounding advantage. The Bears missed their final 8 shots of the opening stanza.

The Bears will now embark on a three-game road swing, starting Sunday at 3 p.m., against Oral Roberts University in Tulsa. That game will be featured on KOZL-TV and the Missouri State Television Network.