The National Guard presence in the St. Louis region is being scaled back. 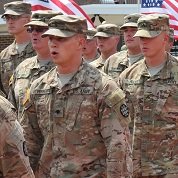 Governor Jay Nixon says “improving conditions” in the region are allowing the state to reduce the number of Guardsmen and women deployed there.

As of 1 Tuesday afternoon, Nixon’s office says there are 1,268 remaining in the region. There had been 2,200 a week ago.

The Guard continues to support local law enforcement agencies in Ferguson and other parts of St. Louis County.

A state of emergency will remain in place in the region until the middle of the month if not cancelled early or extended.