You are here: Home / Sports / Manning strikes early then lets the running game do the rest as Chiefs drop sixth straight to Denver 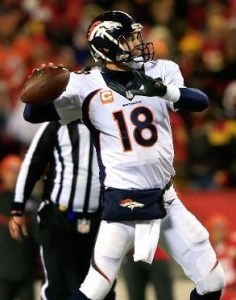 Peyton Manning threw two, first quarter touchdown passes…one to Demaryius Thomas and the other C.J. Anderson, who also ran for 168 yards, as the Denver Broncos increased their lead over the Chiefs with a 29-16 win at Arrowhead.

The loss puts the Chiefs down two games in the standings in the AFC West.

Alex Smith was sacked six times and Denver held the Chiefs to 151 yards of total offense.  Smith was also picked off once.  He threw two touchdown passes, but again not to a wide receiver.  Anthony Fasano had 20 yarder to make it 17-7 with just over three minutes to go in the second half.  Jamaal Charles scored on a 12 yard pass in the fourth quarter to draw within 26-16.