The Mayor of the City of Ferguson says it has “severed ties” with the officer that fatally shot Michael Brown nearly four months ago. 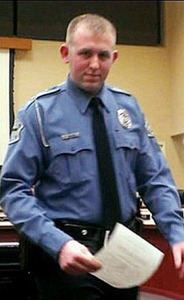 Darren Wilson resigned on Saturday from the Ferguson Police Department.

Wilson said the resignation was in response to threats of violence against the police department if he remained employed there. He told the St. Louis Post-Dispatch he didn’t want someone else to get hurt because of him.

Wilson had been on paid administrative leave since he fatally shot Michael Brown, Junior, August 9. That shooting has sparked months of protests that at times turned to violence, the worst of which was a week ago when a grand jury announced it would not indict him for shooting Brown.

Wilson said he hopes his resignation will allow the community to heal.