Governor Jay Nixon (D) says he will call a special session of the General Assembly so that it can make changes to the current state budget to pay for the National Guard and the Highway Patrol to continue operations in Ferguson and the St. Louis region. 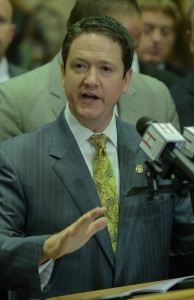 At least one legislative leader says there is some question about whether a special session is what is needed.

“We just want to make sure that the Governor’s request is valid, that it’s honest, that it’s accurate, before we go and try and do anything with taxpayer dollars,” House Speaker Tim Jones (R-Eureka) told Missourinet.

“It’s a tough balancing act,” Jones continued. “Every single one of us wants to make sure the Guard is fully prepared and fully funded.”

Earlier story: Gov. Nixon to call legislature back early due to cost of Ferguson response

Jones says Republican legislative and budget leaders participated in a conference call with Nixon Friday. Nixon says the Guard and Patrol are about to exceed the amount they were allotted in the current fiscal year’s budget.

“Let’s remember the fiscal year just began on July 1. We’re not even six months into the current fiscal year, and the governor is alleging that … he is about to exhaust all potential funds for all National Guard and emergency services-related personnel for Ferguson,” said Jones. “I think we owe it to the taxpayers as well as the National Guard and the other emergency service workers to make sure that this governor’s request is true and valid and that the governor is not just trying to use a special session for some kind of political purpose to repair his very badly damaged image at this point as he continues to get criticized by folks on all sides of the political spectrum.”

Nixon’s office says the date of the special session will be announced in the coming days. The regular legislative session begins Wednesday, January 7, meaning there will be a difference of weeks between when it would wrap up work and the new legislature would convene and could begin considering a mid-year budget.

Jones says that’s another reason he questions whether a special session is the only way to proceed.

“If we need to cover this two- to three-week gap by a special session to make sure [the Guard and the Patrol] are taken care of, we will absolutely do that, but if there’s another way to do it short of going into a special session … I think we need to make sure and to challenge the governor to not waste taxpayer money and have some big political show for himself … when none of this theater may be necessary at all,” said Jones.

He says in the past, Nixon has been able to move money between funds to meet needs. “I can think of the Joplin tornado as a good example of that, where we didn’t need a special session for that incident. The governor came up with the money.”

Nixon Administration Budget Director Linda Luebbering says she isn’t ready to speak at length about the situation while it is still being reviewed, but told Missourinet, “We do have enough information to know that the emergency response will cost more than the available appropriation.”