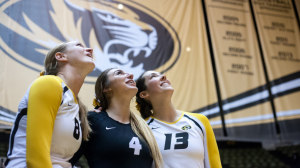 Mizzou volleyball closed its season with a 3-2 (27-25, 25-23, 21-25, 21-25, 12-15) loss to Alabama on Wednesday night (Nov. 26) at the Hearnes Center. The Tigers were led by sophomore Carly Kan (Honolulu, Hawaii), who tallied her 19th double-double of the season, matching the school record for double-doubles in a season during the 25-point set era. She finished with 18 kills on .340 hitting with a career-high 24 digs in the loss. The loss wraps up the storied careers of seniors Whitney Little (Keller, Texas), Sarah Meister (San Diego, Calif.) and Emily Wilson (Omaha, Neb.), who finish with a four-year record of 91-43.
“We really showed a lot of fight tonight against a really good Alabama team but it is always tough to send seniors out after a loss,” head coach Wayne Kreklow said. “We had opportunities late in each set we lost but didn’t make enough plays and some calls didn’t go our way. It was a tough way to end the season.”
Aside from Kan, Mizzou got a nice performance from its senior class, highlighted by 13 kills and two blocks from Wilson. Meister pulled in 14 digs and Little pitched in six kills on .400 hitting with five blocks. Sophomore middle Julia Towler (Blue Springs, Mo.) pitched in seven kills on .286 hitting and freshman Kasey Reuter (Sioux City, Iowa) added six kills and four blocks with a career-high four aces as well.
Mizzou and Alabama played a tight set to open action with neither team opening more than a three-point lead. Mizzou went on top, 7-4, early but Alabama rallied to tie the set at 8-8 after a kill from Kat Hutson. From that point, Alabama went on a run and took a 15-12 lead midway through the set. But the Tigers rallied to tie the set at 15-15 on an error from Hutson. Neither team led by more than one until Mizzou clinched the set, 27-25, on a bump-kill by Kreklow after a huge dig on a right side attempt from Krystal Rivers. Mizzou hit .450 in the set, which neutralized nine kills from Rivers. Kan led the way with six kills in the opening frame.
In set two, Mizzou fell behind, 15-10, until Reuter went back and served six straight points to give Mizzou a 16-15 lead. The set was much like the first frame from that point as both teams played very evenly. Mizzou ended up clinching the set with a rotation violation, winning 25-23. Kan nearly had a double-double through two sets with nine kills and 18 digs.
Momentum flung to Alabama’s side following the break as it won set three, 25-21, and the repeated that feat in set four, forcing a decisive fifth frame. Mizzou ran out to a 3-0 lead in set five, but Alabama ran off five in a row to take a two-point lead, a gap that Mizzou struggled to close. The Tigers got as close as one on several occasions, but Alabama sided out to a 15-12 set win to clinch the match.
The loss wraps up the Tigers season as they finish 16-17 and 7-11 in SEC play. For all the latest on Mizzou volleyball, stay tuned to MUTigers.com and follow the team on twitter @MizzouVB.