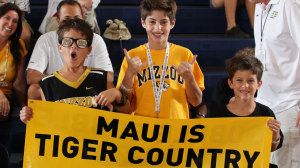 Mizzou Men’s Basketball kept host school Chaminade at an arm’s length throughout the Tigers’ final game at the EA Sports Maui Invitational, outrunning the Silverswords down the stretch for a 74-60 victory on Wednesday, Nov. 26.

Head coach Kim Anderson’s squad (3-3) was led in scoring by two freshman Tiger guards in Namon Wright (21) and Montaque Gill-Caesar (19). Wright had a season-best outing in impressive fashion, shooting 7-for-7 from the field and 4-for-4 from three-point range.

Gill-Caesar continued his strong start to his collegiate career with a 5-of-11 FG shooting performance, including 4-of-8 from three-point territory. He also grabbed four rebounds.

Wright was red hot to start the game and throughout for Mizzou, hitting from deep on his first three shot attempts, the third staking the Tigers to a 24-11 lead at the 7:49 mark in the first half.

Junior forward Ryan Rosburg also started the game hitting his first three shots from the field, all on strong moves directly around the basket. The Tiger big man finished the game with nine points on 4-of-5 FG shooting.

Another Tiger was perfect from the field in freshman guard Tramaine Isabell, who shot 4-for-4 for nine points in the win. Sophomore guard Wes Clark hauled in a career-best nine rebounds, as well.

Chaminade (2-3) managed a 10-2 run to close the first half to give Mizzou a 38-28 advantage at the halftime break. The Tigers outrebounded the Silverswords 23-14 in the opening period.

The Tigers are back in action in home at Mizzou Arena on Tuesday, Dec. 2, facing SEMO at 7 p.m. on SEC Network +.

Previous Post: « Mizzou volleyball ends season with five set loss to Alabama on senior night
Next Post: According to report, Indy would host Rams-Raiders on Monday if game would need to be moved »