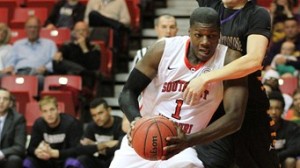 Six of BGSU’s final eight points came at the free throw line allowing the Falcons to pull away late.

Nino Johnson’s jumper narrowed the Falcons lead to 54-52 with just under two minutes left. Jovan Austin countered with a runner in the lane and followed with two free throws after Southeast turned the ball over.

Johnson then missed two free throws before Zach Denny was fouled. Denny knocked down both of his shots to extend BGSU’s lead to 60-52 with 22 seconds on the clock.

Southeast started slow out of the gate, committing three turnovers and missing three field goals in the first four minutes as BGSU built a 10-2 lead.

After Chauncey Orr’s layup capped BGSU’s early run with 16:13 remaining in the first half, the Falcons went scoreless for the next 6:51. The Redhawks capitalized on the drought, scoring seven unanswered points. Bradley’s pair of free throws made it a 10-9 game at the 10:23 mark.

Two possessions later, Bradley knocked down a three-pointer from the corner to tie the game at 12-12 with 8:46 left to play. The Redhawks then went ahead, 16-14, on Aaron Adeoye’s free throws with just under seven minutes to go.

The Redhawks led only once in the second half when Antonius Cleveland’s layup gave Southeast a 30-28 edge with 15:53 remaining.

BGSU outrebounded Southeast, 38-30, and held a 15-7 advantage on the offensive glass. The Falcons also outscored the Redhawks, 36-20, inside the paint.

Bradley put up a double-double 18 points and 10 rebounds to lead all scorers. He shot 5-of-12 from the field as all but one of those shots came from behind the three-point line. Bradley added a perfect 4-of-4 free throws and dished out two assists in 35 minutes.

Aaron Adeoye contributed 12 points and eight rebounds off the bench and Johnson followed with 10 points, four blocks and two steals in 33 minutes.

Meanwhile, Richaun Holmes and Parker paved the way for BGSU with 14 and 10 points, respectively.

The Redhawks, who saw a two-game winning streak come to an end, return home to host Southwestern Athletic Conference foe Alabama A&M on Nov. 29. Tip-off is set for 6 p.m., CT, at the Show Me Center.