You are here: Home / Sports / Mizzou over-matched by Arizona in a poor shooting effort to start the Maui Invitational 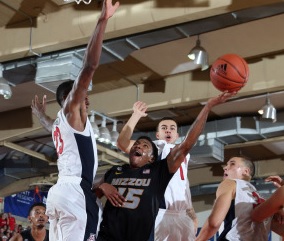 Wes Clark forces a shot up against Arizona (photo/Mizzou Athletics)

Rondae Hollis-Jefferson and Brandon Ashley each scored 15 points, helping No. 2 Arizona wear down Missouri for a 72-53 victory in the opening round of the Maui Invitational on Monday.

Missouri had 17 turnovers that led to 24 points for Arizona.  Montaque Gill-Caesar led the Tigers with 13 points.  Wes Clark, who averaged 14 points through the first three games, had three points on 1-of-6 shooting.

Missouri: will face Purdue in the Maui Invitational loser’s bracket on Tuesday.