You are here: Home / Sports / Central Missouri’s soccer run at a Final Four comes up short 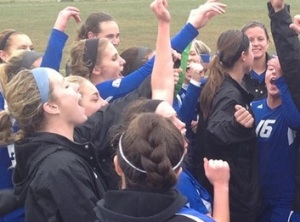 The 10th-ranked Jennies soccer team’s Final Four aspirations came to an end on Sunday afternoon, falling to No. 11 Grand Valley State, 3-1 in the Elite Eight at Wood Field.  The loss snapped a 23-game unbeaten streak dating back to November 15 of last season.

Grand Valley State struck first in the 19th minute courtesy of Jenny Shaba, who collected a rebound off her own shot.  The Laker’s second score of the game came on a penalty kick by Gabriella Mencotti in the 39th minute.   In the 72nd minute Mencotti found Shaba towards the middle of the field, who scored from about 25 yards out to put the Jennies in a 3-0 hole.

A goal by freshman Mikala Modiri who lobbed the ball over the goalkeeper’s head from 10 yards on the right, cut the deficit to 3-1. The goal was Modiri’s eighth this season.

The 21 victories for Central Missouri this season were the most in program history.