Ferguson policeman Darren Wilson remains in seclusion but his lawyers have reacted to the grand jury decision not charge him in the Michael Brown shooting. 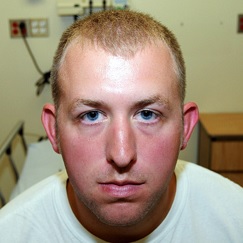 Lawyers say the past few days have been “tense” for Wilson. They say any further comment about his future will be made in what is called in an “appropriate venue” and not through the media, a comment perhaps based on reports that have surfaced in the last few days that Wilson has been in secret negotiations with the leading anchors of major network newscasts and cable news channels.

The lawyers say Wilson “followed his training and followed the law” in that August 9th encounter with Michael Brown. They say police officers often have to make “split-second and difficult decisions” of the kind Wilson made.

Lawyer Neil Bruntrager tells the St. Louis Post-Dispatch there’s no reason Wilson should be fired from the Ferguson department but it is appropriate for the department to decide if his shooting of Brown was within department policies. The Ferguson police chief is not commenting.

United States Attorney General Eric Holder says the Justice Department’s investigation has been independent of the St. Louis County grand jury’s work and is ongoing. He says the department is continuing to investigate allegations of unconstitutional policing patterns or practices by the Ferguson department .

The aftermath of the grand jury decision also brings news that Wilson got married a month ago to a veteran Ferguson policewoman.  She has gone on sick leave because of job stress.