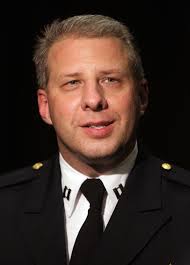 Metropolitan Police Force Chief Sam Dotson says law enforcement has a good plan. He tells CNN, “Our goal..is to keep people safe, to keep businesses..open and safe, but at the same time to allow people to have their voice heard, their constitutional right to protest.”

But Dotson says he’s concerned about reports of surging gun sales and concealed weapons permits being issued: “It’s that hysteria, that anxiety that’s coming through…Introducing guns and more guns into the situation…I think every police chief worries about guns in their community.”

While some people question the legality of Governor Nixon’s call up of the National Guard, Dotson has no qualms about having the troops in the area. He says the Guard will supplement local law enforcement so regular officers can interact more with citizens and protestors.  He says the National Guard is “in the background.”

The grand jury considering the shooting of Ferguson teenager Michael Brown continues considering that and any other cases referred to it while reports circulate that Ferguson policeman Darren Wilson is negotiating his resignation from the department. Dotson says, “I think everybody in the community and in the region realizes he could not return to the Ferguson police department. But that’s his decision,”