Something has happened with the Navy’s nuclear submarine named for Missouri’s Capitol City that is so serious the sub has been stalled in Guam for five months. The Navy Times says the USS Jefferson City has been “marooned” and calls the situation “a bizarre development.” 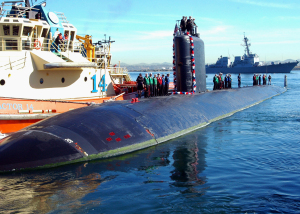 The sub left San Diego April 9 for a six-month cruise.  But it docked in Guam June 21 and has remained there.  The Navy Times says the crew of 140 has been “stranded” and the submarine has missed deadlines for either returning to San Diego or going to Pearl Harbor for repairs. The Navy reportedly has not told crew members or their families when the Jefferson City will get back to San Diego.

Whether it gets back to San Diego at all has become a sore point, too, because the Navy now has announced the sub’s home port is being shifted to Pearl Harbor as of November 25, five months earlier than originally planned.

Senior writer Mark Farram quotes a spokesman for Submarine Force Pacific saying, “Jefferson City has a very small water leak from la valve internal to the propulsion plant”–a water  coolant leak that the Navy says is not putting anyone in danger and is not contaminating the environment.  The Navy considers the Jefferson City still on deployment “until return to home port—in this case, their new home port of Pearl Harbor.”

A spouse of one of the crew members has told the Times the announcement, which came last month,   “really hit us out of the blue.”

The newspaper reports the Navy was not planning to issue the crew Hardship Duty Pay of as much as $495 a month until it began making inquiries which led the Jefferson City’s ombudsman to put out a gag order to crew families.

The Navy Times is in independent weekly newspaper published by the Gannett Corporation, the same company that publishes USA TODAY and a large number of daily papers throughout the United States.

Previous Post: « Get online and vote for Mizzou’s Murphy. He’s a finalist for the Paul Hornung Award. Get the link to case your vote right here
Next Post: Where the Mizzou football program is today and does it get the credit it deserves? (Google Hangout) »