The next round of state law-making doesn’t start for about two months. But relations between the Governor and the legislature are already rocky.

Republicans regularly claim Governor Nixon is not engaged in the lawmaking process, that he vetoes bills that he might have signed if he had been more interactive with the legislature.   The Democratic Governor points to several bipartisan successes during his first six legislative sessions. “Whether strengthening our mental health industry or  revitalizing our automotive industry or building a new Fulton, we’ve worked across the aisle to get things done,” Nixon says.

But Senate leader Tom Dempsey says the facts prove otherwise, and he has personal experience., noting, “I’ve sponsored legislation for the governor based on his State of the State where he has backed off his support during the process.” 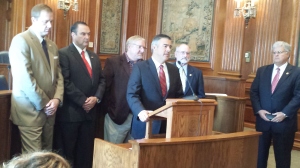 He says Nixon and his Department of Public Safety didn’t communicate with the sponsor of the Criminal Code revision this year, which was handled by Democratic Senator Jolie Justus. Instead, says Dempsey,  the Nixon administration sent messages to outside organizations to influence policies set in the new criminal laws.

Senator Mike Kehoe of Kansas City is critical of Nixon for soliciting his support for a state office project this year and asking him to lead the legislative effort to approve the plan.  The legislature approved the bill, but Kehoe complains Nixon then vetoed the bill “without a phone call to anybody.”

Nixon says he looks forward to working with the legislature.

Previous Post: « Nixon stands by state of emergency, activation of Missouri Guard
Next Post: Great return to the court for Missouri State’s Marshall. After season ending surgery in January, Marshall named MVC player of the week »