You are here: Home / Sports / Oshie returns to the lineup and score the Blues first goal in victory over Nashville 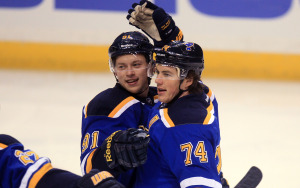 St. Louis Blues Vladimir Tarasenko of Russia (L) congratulates T.J. Oshie on his first goal of the season in the first period aginst the Nashville Predators at the Scottrade Center in St. Louis on November 13, 2014. UPI/Bill Greenblatt

T.J. Oshie, who was activated from injured reserve after missing seven games with a concussion, scored his first goal of the season for St. Louis as the Blues beat the Nashville Predators, 4-3 Thursday night at Scottrade Center.  The win put the Blues back into first place in the Central Division.

Paul Stastny scored the game winner when he won a faceoff in the Preds’ zone then tipped in a redirection off a Kevin Shattenkirk wrist shot with just under six minutes to play in regulation.

The “STL” line of Jaden Schwartz, Vladimir Tarasenko and Jori Lehtera combined for five points as they continue their tear.