The Missouri Public Service Commission has started taking testimony from those for and against running a high-voltage power line across northern Missouri. 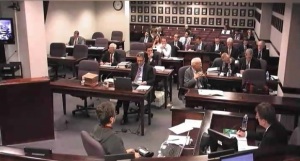 The $2.2-billion Grain Belt Express project would run that high-voltage line and associated converter stations from just south of St. Joseph in northwest Missouri to just south of Hannibal in northeast Missouri. That line would carry power from wind turbines in Kansas east to Missouri and power grids in eastern states. The company behind it, Clean Line Energy Partners, is asking the Public Service Commission for approval.

Nathan Williams with the Commission’s staff, however, says it isn’t supporting the project.

“As staff has set out in the position statements it filed last Friday, it is staff’s view that the evidence in this case will not show that the transmission line and converter stations are needed, economically feasible, or will promote the public interest in Missouri,” Williams tells the Commission.

Steven Reed represents a non-profit and a trade association supporting the project. He says it would benefit Missouri and other states, “because of its unique ability to deliver wind from the best wind resource in our country, the Grain Belt, to two of the country’s largest wholesale electric markets … this serves multiple benefits for both Missouri and larger regions of the country.”

Among those benefits, claims Reed, is that it would help utilities to meet their renewable energy and federal clean air requirements, and would provide low wholesale market prices through the addition of low-cost wind energy.

The Missouri Landowners’ Alliance is another nonprofit group opposing the project. Paul Agathen with the Alliance disputes Reed’s claims.

“The fact is,” says Agathen, “that the four investor-owned utilities are not going to be making any use of the Kansas wind transmitted through the Grain Belt Line in meeting those requirements.”

Agathen says there is no evidence the line is needed by Missourians.

Supporters of the project also include the Sierra Club who say it would benefit the environment; opponents include the Missouri Farm Bureau who say the project could harm the value of the properties it runs on and near.

The Commission will continue hearing testimony for the next couple of weeks.