Camping in Missouri’s state parks is up this year. And camping season isn’t over. 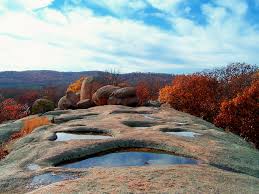 It used to be that this time of year was a time for maintenance and repairs in state parks.  But they’re becoming more popular year-around.  State Parks Director Bill Bryan says camping is up six percent for the year, continuing a trend.  And he says fall camping is becoming increasingly popular.  In fact, he says, Halloween camping including trick or treating is increasing.

Activities change with the seasons. “Hiking is really popular this time of year and it’s growing in popularity with Missouri being recognized as the nation’s best trails state the past couple of years.  People are recognizing that those trails that were too hot to get out on in August are really nice this time of year, and even later in the year,” he says. “When the fall colors fade and the leaves are off the trees,  you can just see through the distance. you’re much more apt to see a deer or some turkey and get a view that you haven’t been able to see when you’re out there in the summer time or even when the fall colors were on. I think people will enjoy it if they bundle up and get out there.”

Bryan says Bennett Springs, Table Rock, and Johnson Shut-ins have shower houses open every day of the year because they’re popular locations for campers. Cabins remain open at Montauk and Johnson Shut-ins.  He suggests people looking for cabins at other parks call ahead.

Previous Post: « Arizona’s defense scores two touchdowns in the fourth quarter to pull away in blow out win over the Rams
Next Post: Sen. Scott Sifton seeks Missouri Attorney General’s office in 2016 »